Black Eggs are items which have appeared in several of the Cube Escape and Rusty Lake games.

During Spring, when the player feeds the bird seed to Harvey, she will lay a black egg. The egg can then be cooked in a pan and placed in an egg cup. Cracking the egg with a spoon releases black moths. Once it is fully opened, a beam of light will shoot from the egg and reveal a black cube.

Inside the box in the first section of the game there is a black speckled egg, lying next to a fish. After the player experiences a vision through a durian fruit and the box arrives at the Lake, the egg is replaced, possibly hatching, and a miniature version of Mr. Crow appears. The player must then adjust his pose in order to complete a puzzle.

In the living room of the Woman, there is a set of Russian nesting dolls. If the player follows the sequence of items into the dolls, the Woman doll opens to give a black egg. The egg can then be placed into the Harvey doll, which in turn gives the player a key.

Back at Dale's office, the player can unscrew the grate off of the vent to get to a cat sitting inside. After shaving off Dale's beard in the mirror, attempting to flush the hair down the sink causes it to clump together and form a baby crow. The crow is fed to the cat, which will eventually make the cat leave and leave a black egg. When the code 746 is logged into the TV, the Woman appears on the screen. She reaches her arm up, and a hand comes through the TV. If she is given the black egg, she will turn it into a white cube before handing it back.

The egg is featured as part of the third play, "The Fish and the Parrot". After adjusting a maze of pipes and feeding Harvey seeds from a pink flower, she will lay a black egg. The egg must then be passed through the same series of pipes to reach a frying pan, where it will break open to reveal a worm. The play ends when the fish is fed the worm.

When James moves into his new house in 1860, he needs to find three diamonds to unlock the front door. After knocking down a bird's nest from the roof, the player will see a single black egg inside. Clicking on the egg hatches a baby crow that flies away after being fed a worm, leaving behind a green diamond.

In the alchemist laboratory underneath the Vanderboom house, Aldous and William are trying to create the Elixir of Life. Mixing together chalk and dust creates a black egg which, when combined with a glass bottle, gives the complete Elixir.

Playing Harvey's Song in reverse causes her to fly back into the room, and perching herself on the Woman's shoulder. She says the word "Johnsson", referring to an advertisement found in the telephone book, Johnsson Bird Food. After calling the number and ordering bird food, it is fed to Harvey who in turn lays a black egg. The egg is then given to the Hand, which disappears to reveal Mr. Owl. 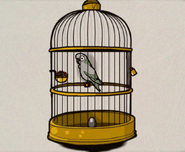 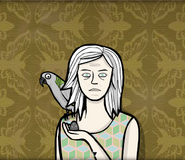 The Black Egg in Cube Escape: Paradox.
Add a photo to this gallery
Retrieved from "https://rusty-lake.fandom.com/wiki/Black_Egg?oldid=12239"
Community content is available under CC-BY-SA unless otherwise noted.