The Bloody Mary is a drink consisting of blood, vodka, and Tabasco sauce.

The ingredients are gathered from Mr. Deer's room, and served to him in a glass from his table. Along with the standard ingredients, this cocktail contains deadly poison, which will kill Mr. Deer when he drinks it. This is a necessary step for the player in order to get the deer meat required for the night's dinner.

In order to complete the game, the player needs to serve this drink to Bob, the lone man sitting at the bar. It will be his third drink. The ingredients are mixed in a cocktail glass. When it's given to Bob, he will shoot himself in the head with his pistol, allowing the player to go inside his head and harvest his memories.

On the fourth day, Bob is given a Bloody Mary for his dinner. That night during his dream, he is sitting at the bar in the Rusty Lake Theatre. He orders another drink, a Bloody Mary, from the barman. After taking a sip, Bob shows the barman the picture of the Woman, to which he gives Bob a pistol to shoot himself.

A Bloody Mary, as it appears in Rusty Lake Hotel. 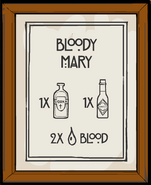 A Bloody Mary in The White Door.
Add a photo to this gallery

Retrieved from "https://rusty-lake.fandom.com/wiki/Bloody_Mary?oldid=11755"
Community content is available under CC-BY-SA unless otherwise noted.