Mr. Bat is the porter and elevator operator at the Rusty Lake Hotel. Unlike most humanoid characters he does not speak, and only gives a faint hiss if the player attempts to interact with him too much.

In 1893, he takes the player between the floors of the Hotel at night, after the dinners have been served.

On the third night, a falling star is seen through the window in the lobby, and it becomes dark. Mr. Bat hides on the ceiling, forcing the player to chase him around until he goes back to his post. When the lights turn back on, the player can speak with him to obtain a handful of potatoes needed for Mrs. Pigeon's dinner.

On the sixth night, when the last dinner is taken to Mr. Owl's room, he hangs above the door, blocking the player's way out.

In 1972, he is found in animal form hiding in a dark crevice and can only be found after lighting a torch. He hisses at the player, until he is given a moth to eat. This causes him to fly away, leaving behind a card of Dale Vandermeer that is needed to complete a chapter in the Book. 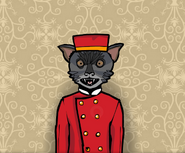 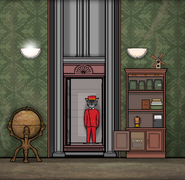 Mr. Bat in Cube Escape: Paradox.
Add a photo to this gallery
Retrieved from "https://rusty-lake.fandom.com/wiki/Mr._Bat?oldid=11736"
Community content is available under CC-BY-SA unless otherwise noted.