Rusty Lake Cigars, or The Lake Cigars (as written on the box), are one kind of cigars made in the Rusty Lake area. The box says that these cigars are the finest quality, and shows an image of three cubes above the Lake with its iconic boat.

The box of cigars is found right from the start of the game, though it is locked and needs a key to be opened. Inside is a single cigar, along with a knife and piece of paper, which provides a clue on solving a puzzle. The cigar itself is given to the Fish, in order to fill up the wine glass and mimic the pigeon's call.

One half-smoked cigar can be seen still burning, placed on an ashtray in the Woman's house. The player uses the cigar to burn holes through a Lacus Fleo painting, "The Lady of the Lake". The holes reveal a code beneath the painting, which is used to find out the phone number to the Mill in Rusty Lake.

The cigars are listed in the player's recipe book as the "Secret Rusty Lake Specialty", though their actual identity isn't revealed until they are collected. Initially locked in a safe box in the Hotel lobby, the cigars can only be taken after putting in each Hotel guests' key into the safe in the right order. Once collected they can be brought to Mr. Owl for the final meal. He will thank the player for bringing them once they do, addressing the player for the first time by their name, Harvey.

The first cigar is found on an ashtray, and it is lit with matches. The player blows smoke rings, which are in reality the code to a combination locked cabinet. Later, the burning cigar is used to burn holes through paper to get phrases to type into a typewriter.

The second cigar is again found in the ashtray. It is used to burn a hole through a Corrupted Soul on a painting, in order to get the key hidden inside. After the player gets their present mind, they run into Mr. Crow who requests a cup of coffee. The coffee machine is heated by oil, which is lit with the burning cigar. The cigar is used one more time to seal a letter after the player finds their future mind.

The Cigar in Cube Escape: Case 23.

The Cigar in Rusty Lake Hotel. 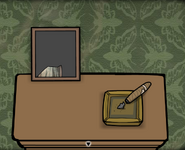 The Cigar in Cube Escape: Paradox.

The Cigar in Paradox.
Add a photo to this gallery
Retrieved from "https://rusty-lake.fandom.com/wiki/Rusty_Lake_Cigars?oldid=11370"
Community content is available under CC-BY-SA unless otherwise noted.