The Shell is an item, and motif that has appeared in several of the Cube Escape games.

It is caught with a fishing rod, with a piece of mold as bait. Along with a gem, an eye, an apple and a coin, it is a piece of the pentagram used to spawn a Corrupted Soul, when placed on the tree grown out of the fish.

Once the player opens up the fruit, they can look into it. Inside it is a spiral staircase, shaped exactly like the shell. Travelling further down the stairs the player will eventually get to the bottom of the fruit, where they will see a birds-eye view of the box itself. It is at this moment when the box reaches the Lake.

The shell can be found inside the Woman's house, in her fish bowl. The player must use the push a fly over to the shell. Before the fly can enter the shell, one of the Hand's fingers pops out and pushes the fly away to the center of the bowl, turning it into a firefly.

Later in the Chapel, after solving the statue's combination puzzle, it will give the player a shell. The shell can then be placed into a square slot on the opposite side of the chapel. The slot, when opened, contains a can of oil.

In Mr. Rabbit's room, the player will have to play the shell game on the table. At first, a small pebble is shuffled, which becomes the shell when picked correctly. The shell will then become a thimble, which will in turn become a beetle, and finally an eye.

During the first play, "The Lady of the Lake", the woman will want you to balance the substances of her past lives. The player will need to use the combination found on the mirror in the bathroom. This will open up the right compartment of the safe, which contains the shell. When balanced correctly on the scale along with the other items, the woman will shine a beam of light from her mouth and give the player a flower, ending the play.

In 1870, James is searching for his uncle's laboratory. By solving the puzzles on the bookshelf, it slides over to the side revealing a secret doorway. Through the doorway is a spiral staircase, shaped like the shell, which leads to the laboratory.

Then in 1896, Emma has decided to paint out in the front yard. There is a white shell on the grass, which can be ground with a mortar and pestle, and then made into white paint by adding oil. The white paint is added to the palette, and used to paint the blank canvas. When the painting is finished, Emma hangs herself.

During the Ninth Plague, the player takes the shell and grinds it into a white powder. Throwing the powder onto the fire reveals a Corrupted Soul holding a scale, representing the zodiac sign Libra. This is used as part of a code to a zodiac clock in order to get a key to the second floor to the tower.

In the Fish Room, there are four shells hidden around the room that are needed to activate the window portal. After being placed in the four empty slots, the portal will open and take the player to another room depending on what is placed in the middle plate.

The Shell in Cube Escape: The Lake. 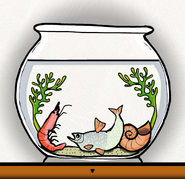 The Shell in Cube Escape: Case 23.

The Shell in Rusty Lake: Roots.

The Shell in Rusty Lake Paradise.

The Shell in Samsara Room.
Add a photo to this gallery
Retrieved from "https://rusty-lake.fandom.com/wiki/Shell?oldid=12242"
Community content is available under CC-BY-SA unless otherwise noted.