The Rusty Lake games do not take place in chronological order, with some involving travel to previous years within their own direct timeline. This page contains an approximate timeline for known events in the Rusty Lake series, including both the Cube Escape series and the premium games.

Please note that this timeline contains some speculation and is subject to change as new games are released. Numerous changes are made to the timeline, resulting in alternate timelines detailed in the italic sentences

Overview of the first six games. 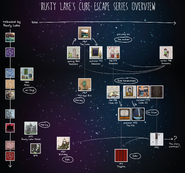 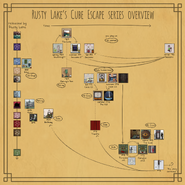 Cube Escape overview by the end of 2018

Full universe overview after Samsara Room remake's release
Add a photo to this gallery
Retrieved from "https://rusty-lake.fandom.com/wiki/Timeline?oldid=11514"
Community content is available under CC-BY-SA unless otherwise noted.